1991 Stadium Club is the first Stadium Club Baseball set ever released by Topps. This was the largest non-flagship set that had been produced to date. The cards were drastically different from traditional Topps sets. The cards used full bleed photographs instead of frames or borders. The photography itself was typically a step-up from what was typically used in Topps sets. The traditional cardboard was also given a glossy finish. This was Topps' answer to Upper Deck, an upscaled production value set, moving Topps towards a more high-end product.

The set was released in two series. The set was only available in packs and not offered as a factory set. 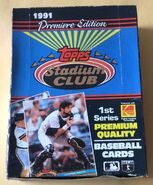 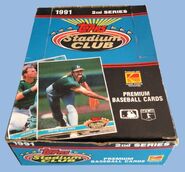 This card set article could use a checklist. Tedious yes, but very useful. You can help the Baseball Card Wiki by creating one.