The set was distributed in factory set form only, rather than in packs. The packaging was made to look like the Toronto SkyDome (now known as the Rogers Centre) which hosted the Major League Baseball All-Star Game in 1991. 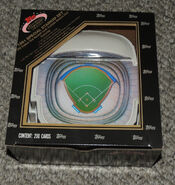