1995 Pacific Harvey Riebe is a single card set produced by Pacific to honor the World War II veteran Harvey "Hank" Riebe. Originally Riebe made the major leagues as a catcher for the Detroit Tigers at 21 years old in August of 1942. After a promising start to his career, he was drafted and sent to war. During the war, he received two Purple Hearts for wounds sustained in combat. As a baseball player, his career was over just as it was beginning. He would return to the major leagues but was never the player he could have bloomed into. 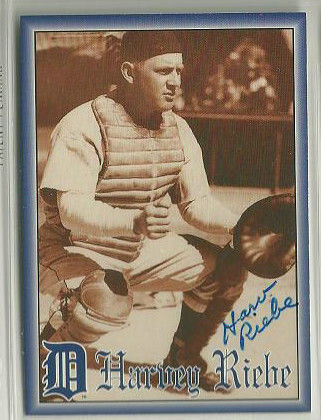 Note the card is not normally autographed!