2001 Bowman was a baseball card set released by Topps. The set was the first to move to the black bordered set that would become the standard for the remainder of the decade. 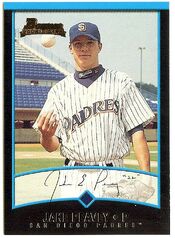 The base set was black bordered, leading to some condition sensitivity due to nicks on the edges of the cards.

Base Set: 440 cards. The focus of the set is primarily on prospects and rookies only approximately 140 of the cards feature veterans.

The rookie class in the 2001 set was very strong on the merits of only five players. Albert Pujols, Justin Morneau, Jake Peavy, Jose Reyes, and Travis Hafner.

The Gold parallel set in 2001 Bowman added gold foil to the facsimile signature included on each card. The cards were inserted 1 foil parallel or other insert per pack.

2001 Bowman continued the tradition of autographed insert cards and included some new types of inserts, rookie reprints from the original Bowman releases from 1948-1955.

Forty on-card autographed cards were inserted 1 per 74 hobby packs and 1 per 35 jumbo packs. Dustin McGowan did not return his cards in time for pack out and thus his card is only available as an Exchange that had an expiration date of April 30, 2003.

Ten buy-back style autoproofs were inserted into packs at a rate of 1 in 18,259 hobby and 1 in 8306 jumbo packs. The set was limited to 25 serial numbered copies per card.

Inserted at an overall rate of 1 per 12 packs, the 25-card Rookie Reprint insert set celebrates Bowman's history of producing rookie cards from many Hall of Fame players. The cards are identical reprints to the original cards, except that they have been resized to the standard card size.

A selection of the Rookie Reprint inserts were autographed and inserted into packs at a rate of 1 in 2467 hobby and 1 in 1162 jumbo packs. According to officials at Topps only 100 sets were produced. Card number 7 does not exist.

A selection of the players featured in the Rookie Reprint sets were also featured on Game Used Bat cards. This five card set was inserted into packs at a rate of 1 in 1954 hobby and 1 in 928 jumbo packs.

A limited number of Bat relic cards were autographed and inserted into packs. According to Topps, they were were inserted into packs at a rate of 1 in 18,259 hobby and 1 in 8306 jumbo packs. Thus there are approximately 50 copies of each card although the cards are not serial numbered.

Game Used jersey swatches were included in a 34 card insert set. The cards were inserted at varying rates, depending on which of the four groups the card was included in. The overall insert rate for this set was 1:82 hobby packs and 1:39 jumbo HTA packs.