The cards were relased in Hobby and Retail packs. Both came 24 packs to a box with 8 cards per pack. The main difference between the two is that Hobby packs had a much high hit rate for autographed and game used inserts. The set was originally released on Dec 22, 2004. 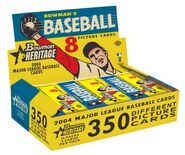 A 351 card master set with 300 base cards and 51 short prints. These cards are based on the 1955 Bowman set (the last of the released for the public Bowman designs) with the TV border. The cards are all set up as landscaped photographs rather than portrait in reference to the original set. Cards 40 and 48 feature Victor and Pedro Martinez, each card had a short printed variation with the wrong Martinez's stats on the back. The original 1955 set made the same mistake (albeit unintentionally) with card #48 Milt Bolling. Additionally the Giles brothers are featured on one card #139 as homage to the original set that featured the Shantz brothers on the same numerical card. Umpires are also included in the set as a reference to the original 1955 set.

51 short prints were included and inserted at a rate of 1 in 3 packs.

One of the most popular parallel sets ever included in Bowman Heritage, these cards are heavily collected by a number of set builders. The cards were printed on a "mahongany" stock with a different texture than the other cards in the set and serial numbered on the back of the card to 25 copies each. The cards were inserted at a rate of 1:39 hobby only (approximately 1 per two boxes). All 351 of the cards in the base master set are paralled.

The set builders working on the this set do not follow book values. If there is a card they need for their set they will pay upwards of $300 for a single semi-star card (For example:In January 2007, a Mike Sweeney sold for $310 on eBay).

As with many of the other Bowman and Topps products of the mid 2000's, Topps released the printing plates for the set into packs. 4 colored plates were used to manufacture the cards (Cyan, Yellow, Black, Magenta) and all of them were inserted into packs at an overall rate of 1:240 hobby packs only.

Card sales for these printing plates have been relatively light since 2006 due to lack of supply. A Jack Wilson plate sold in Feb 2007 for $32 on eBay.

In addition to the other sets listed below an exchange card for an M.J. Roop Archivers binder was also inserted at a rate of 1:240 hobby packs (approx 1 per case). The exchange deadline was 12/31/06. The Roop binder was large enough to hold the 351 card base set only and came with a checklist page and 1 page with oversized images of the Alex Rodriguez and Barry Bonds cards.

One extreme chase card was also inserted into packs. A single (1/1), unique cut signature card of Ford Frick, who was the commissioner of baseball in 1955 was inserted at a rate of 1:320,720 hobby packs. This card is known as the Commissioner's Cut card, numbered FF on the back.

These cards are autographed inserts of major league umpires. As important as umpires are to the game of baseball, this was the first inclusion of autographed cards of umpires in a set. The 20 umpires selected were the most recognized umpires in the game, however the set was not a hit with collectors, there is simply not a high demand for cards of umpires.

The base level cards were signed in Blue ink and were inserted 1:49 hobby packs and 1:107 retail packs. The print run of the Blue ink versions is approximately 550 cards. Singles can be easily found on eBay for less than $10 a piece.

The Red ink versions were printed to 55 serial numbered copies and inserted at a rate of 1:499 hobby and 1:1019 retail. Prices for these red parallels fluctuates but is typically $15-$20.

Another series of autographed inserts in 2004 Bowman Heritage. These cards feature the signatures of some of the top prospects in 2004. Phillip Hughes is far and away the most popular card in this set.

Overall there were approximately 2 game used by hobby box and 1 game used per retail box. The Bobby Cox, Mike McDougald and Ruben Sierra cards are notable due the small number of game used cards that are actually in circulation for each player.