2006 Bowman Heritage is a baseball card set produced and distributed by Topps. The set was based on the 1949 Bowman set. 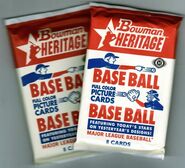 This 50 card game used set was inserted at an overall rate of two per box in four different groups each with slightly varying odds. It was also paralleled in with a Black parallel set (num'd 1/1) and a White parallel set (num'd /49). The set had numerous quality control problems leading to many incorrect game used pieces being placed in the cards.

This 22 card set features hand signed cards of some of the best prospects in baseball. The cards were inserted at a rate of approximately 1 per hobby box. The set was paralled with a Red Ink version (/5) and a Silver Ink version (1/1).

This article is a stub. You can help Baseball Cards Wiki by expanding it.