2006 Topps Heritage was a baseball card set produced by Topps. It is based on the 1957 Topps Set. There was some controversy with this set and the Alex Gordon card that was included.

Cards were distributed in Hobby and Retail packs with differing odds on the various insert cards. 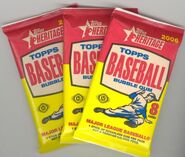 Modeled after the 1957 Topps set, the cards featured mostly staged photographed surrounded by a thin white background on cardboard stock. The player’s name, position and team were printed on the front at the bottom of the card in various colors. The backs of the cards featured short biographical information and a full major league statistical record. Where space was available the mini trivia questions from the original 1957 set were also printed on the card backs. The base set is 384 cards while a master set is typically 494 cards (which includes the short prints). Card #255 (Alex Gordon) is not included in either the base or master set due to its rarity but it is the 495th card.

Card number 255 is the previously mentioned Alex Gordon card. It was "accidently" released with the middle of the card cut-out. Due to the new rookie card rules put in place by the MLPA, the Gordon cards could not be released. At Gordon's peak the card regularly sold for $300-$400. But now sells for less than $100. There are no other notable rookie cards in the set.

Inserted at a rate of 1:12 Hobby and Retail packs, the Flashback inserts highlight events that occured during the 1957 baseball season. The the card set features 9 Hall of Fame Players, but focuses more on the Yankees than any other team. Five of the players (Brooks Robinson, Ernie Banks, Frank Robinson and Stan Musial from the set as well as Duke Snider who did not have a regular Flashback card produced) also hand signed 25 copies of their Flashback cards for insertion into the set at a rate of 1:16,400 packs. Similarly, ten seat relic and five autographed seat relic cards were also produced and inserted into packs.

A 15 card set inserted at a rate of 1:15 packs (in both hobby and retail). The card fronts feature a full color action photo of the player on a green background surrounded by a white border. The card backs feature 2005 and career statistics and a short narrative puting their accomplishments in the 2005 season in a 1957 context. For example: Gary Sheffield’s RBI total from 2005 (123 RBI) were compared to the RBI leaders from 1957, Roy Sievers had 114 RBI and was the only player that had more than 105.

A ten card set inserted a rate of 1:15 packs. Each card features two different players from the modern era and a player from the 1957 season. On the front of the card the players’ names are displayed below a portrait of each player on a brown background. The players were selected based on leading the NL or AL in statistical categories (example Clem Labine and Chad Cordero were paired up for leading the league in NL saves in 1957 and 2005 respectively). The backs of the cards feature a list of league leaders for 2005 and 1957. It should be noted that Derek Lee is featured on three of the ten cards after his exceptional 2005 season.

This article about a baseball card set is a stub. You can help Sport Memorabilia Wiki by expanding it.