2007 Bowman Heritage was the last of the Bowman Heritage baseball card sets produced by Topps. This particular set is based on the 1952 Bowman set. As such the variations (some cards with no signature on front) were copied in this set as well. The main insert sets from the previous year, Prospects, Signs of Greatness, and Pieces of Greatness, were all carried forward in this set as well.

The 2007 Bowman Heritage set was carried in both hobby and retail outlets. The packaging is based on the original 1952 Bowman set rather than a current superstar spokesman. 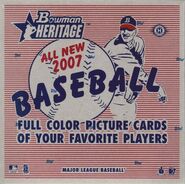 This article about a baseball card set is a stub. You can help Sport Memorabilia Wiki by expanding it.