The cards were primarily distributed at Hobby shops. The cards were packed out with 4 cards per pack, 12 packs per box and 16 boxes per case. As with almost all Legendary Cuts sets the product was primarily marketed as a case break product with most return on investment by buying a whole case rather than a single box. 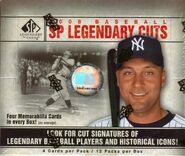 Hobby Pack
Add a photo to this gallery

The Historical Moments set was the only parallel set for 2008 SP Legendary Cuts. Each card was a unique 1/1 with a special achievement from each player's career. Two Historical Moments were inserted per case -- one per mini-case.

Add a photo to this gallery

An 8-card Cut Signatures set featuring players who made significant baseball headlines over their careers. The cards vary in print run and include some of the biggest names in the history of the game including Babe Ruth and Joe DiMaggio.

A 33-card set of retired baseball stars. The cards feature sticker autographs of the players and each card is serial numbered /25.

The 47-card set features young players who looked headed towards "Destination Stardom." All of the card feature jersey swatches, most are a single color with an occasional pinstriped piece.

A 48-card game used insert set featuring the current established stars of baseball. All of the card feature jersey swatches, most are a single color with an occasional pinstriped piece.

A 33-card set featuring primarily up and coming players. Each card is serial numbered out of 99 and is sticker-autographed. Oddly, Derek Jeter, Ken Griffey Jr., and Travis Hafner were included in the set as well.

A huge game used insert set featuring 87 different pairs of players spanning the generations of baseball. Each card featured a game-used swatch from each player. Additionally 17 of the pairs were also featured as autographed cards. Most of the autographed cards had extremely low print runs and several were packed out as redemption cards.

By far one of the most desirable inserts in the 2008 SP Legendary Cuts set. Each of these exchange cards could be redeemed with Upper Deck for significant cut signature card. The final list of all possible players/celebrities is unknown and the card could be redeemed until 12/31/2010.

As with all Upper Deck releases in 2008, Yankee Stadium Legacy inserts were also inserted into packs.

This article is a stub. You can help Baseball Cards Wiki by expanding it.

Retrieved from "https://baseballcards.fandom.com/wiki/2008_SP_Legendary_Cuts?oldid=13787"
Community content is available under CC-BY-SA unless otherwise noted.