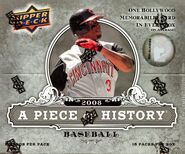 Hobby Box
Add a photo to this gallery

Historical Moment
Add a photo to this gallery

Gold Parallel
Add a photo to this gallery

A Piece of Hollywood MemorabiliaEdit

This 27 card set was inserted 1:16 hobby packs. These cards were also inserted into various Upper Deck products in 2008. The cards feature costume pieces from movies and television shows. The actors' names or likenesses do not appear on the cards, only the title of the show/movie and their first name.

Cut From the Same ClothEdit

These inserts feature two players who are linked by position, team, or stature in baseball. There were several different parallel levels including a dual game used set.

42 rookies were included in the set as autographs. The cards are skip numbered from 101-150 to permit the use of the MLPA RC logo. However, it is currently being treated more like an insert set than part of the main set by many collectors. Overall the cards were inserted 1 per 16 hobby packs. Besides the main set, Blue, Copper, Gold, Silver, and Red parallel sets also exist. All cards have sticker auto rather than on-card.

A 50 card insert set that features today's superstars and some of their finest moments on the field. Besides the base insert set it was also paralled in Blue, Red, Copper and Silver at varying serial numbered print runs. The set was also partially paralled as game used jersey and button cards.

As with all Upper Deck releases in 2008, Yankee Stadium Legacy inserts were also inserted into packs.

Retrieved from "https://baseballcards.fandom.com/wiki/2008_Upper_Deck_Piece_of_History?oldid=28708"
Community content is available under CC-BY-SA unless otherwise noted.