View source
watch 01:54
Obi-Wan Finale - The Loop
Do you like this video?
Play Sound

2012 Topps Archives was a re-introduction of the popular Archives/Fan Favorite sets that Topps had produced from 2001 to 2005. The format of the set was radically changed, previous sets had focused on retired players and Hall of Famers, while this set featured mostly current major league stars and rookies. This was in line with Major League Baseball's requirements that most sets should focus on current players. The number of insert sets was increased significantly with more designs taken from oddball sets.

The set was distributed in both Hobby and Retail formats, with Hobby having significantly better inserts including two autographs per box. 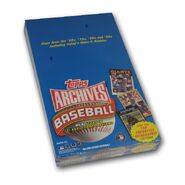 100 oversized cards were handprinted on and signed by Cal Ripken and then randomly inserted as box toppers in hobby boxes. These cards carry a very high market premium and are quite rare. Each card is serial numbered.

For the 1994 Topps Archives set, Hank Aaron hand signed copies of his 1954 Topps Baseball card for insertion into packs. Topps repurchased 25 copies to insert into packs of 2012 Topps Archives. Each card is stamped with Fan Favorites logo and is serial numbered out of 25 copies each.