Francisco Liriano is a pitcher for the Minnesota Twins. Originally signed by the Giants, he was traded to the Twins as part of the deal for AJ Pierzynski.

After rising through the minor leagues quickly as one of the hottest pitching prospects in baseball, Liriano made his full season debut in 2006. He went 12-3 with a 2.16 ERA earning an All-Star appearance and finishing third in rookie of the year voting. He would injure his arm, requiring Tommy John Surgery and missed the entire 2007 campaign. 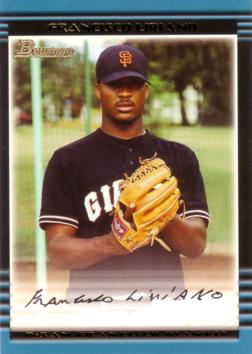 With Liriano's stellar first half of 2006, his card prices increased by leaps and bounds. His injury returned those cards to a more realistic value.

Liriano also appeared in multiple sets in 2006 as a logo rookie.

Retrieved from "https://baseballcards.fandom.com/wiki/Francisco_Liriano?oldid=14958"
Community content is available under CC-BY-SA unless otherwise noted.