Topps Update is an annual baseball card release from Topps that is typically released after the season has concluded.

During the baseball season, players are traded from one team to another and many rookies get their first taste of major league service after September call-ups when the active roster size increases. Also the major league baseball draft is typically held in the summer, again adding players to major league organizations. Finally the playoffs and World Series are held after the majority of baseball card releases have already been distributed, much less designed and printed.

In order to capitalize on collectors wanting cards of star players changing teams, Topps began including Traded players in the sixth series of the 1972 Topps set. This was part of the normal series of cards, but included 7 players who were traded during the season including Steve Carlton, Joe Morgan, and Frank Robinson. More players than just those 7 were traded during the season, but the minor trades were not included.

In 1974, Topps included some Traded cards in the later printing rounds of the 1974 Topps set. That was the first year that Topps printed the entire set in one 660 card series and simply kept printing throughout the season. This 44 card set (43 players and a checklist) would become the first insert "Traded Set". In 1976 Topps repeated this practice.

But in 1981, Topps began releasing the Traded set as a fully standalone product. 1981 was also the first year to include rookies who had not been in the main flagship release (thus beginning the XRC cards). The set has been released annually since 1981 except for 1996, 1997, and 1998. Over the years these sets have been available in factory set form or in packs and structurally have grown to include members of Team USA, draft picks, postseaon highlights, and All-Star Game festivities. Topps also has varied the name over the years: Topps Traded, Topps Traded & Rookies, Topps Updates and Highlights, and Topps Update Series. 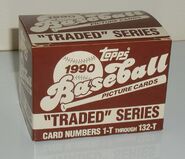